twitter for random thoughts, conference heckling and geeky discussions. I even have two accounts, one public and a private one where I reserve silly ramblings for close friends.

My first ever “tweet” was in February 2008, and it read “Just signed up for Twitter. I feel dirty.” Now, if it were only for twitter, I would have a lot of trouble coming back to this first tweet. The twitter interface (with all its greatness and faults) is geared towards the moment: instant messaging, passing thoughts, trending topics. I actually agree with this focus, but there is one inconsistency: if twitter cares only about the now, I should be able to access and keep my old tweets, and twitter should only be able to know about my latest entries – not the other way around as is the case with the current system.

So, with the help of David and Karl, I wrote a little script to archive (and delete) all my old tweets. David had done most of the hard work a while ago, a nice clean hack using the tweeter API, and allowing you to delete all your old tweets, minus your favorites. It worked perfectly until tweeter, scared to see so many applications use and store credentials for their users, enforced a strict policy of developer keys and oauth tokens. The policy is right, of course, and I cannot but condone anything going against password antipatterns, but I still struggled through the awful process of developer registration, application registration and key-finding… for a script I just wanted to use on my own accounts?

In a way, I guess that the current trend of forcing users to register applications and using complex authentication methods deters the hackers and amateurs, and leaves only the “developers” who are out to make big apps and hopefully some money too. As a weekend hacker and champion of hacker culture and babystep innovation, this saddens me a bit.

In the meantime, the “oldtweets” script is here. It does have a sharp edge (as would anything with a “delete” feature), but works for me. Use at your own risks, use it, break it, fix it, trash it, change it, mail – upgrade it.

First visit at the British Museum: an example of both the best and the worst of exhibition design.

Sometimes you hit the bar… 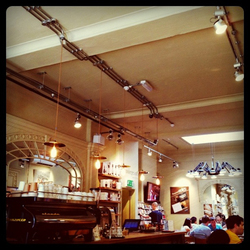 He's hunched on the counter, coddling his drink, taking short sips between jokes, pouring his heart out. On the other side, the owner nods between orders and on occasion whips out a witty reply to his guest.