When you enter the immense hall of the tate modern, this smell the first thing that will hit you, followed shortly by the sound of ghosts raking the field of Ai Weiwei’s sunflower seeds as monks would a zen garden full of small pebbles. Ten centimeters deep, and the surface of a couple basketball fields. 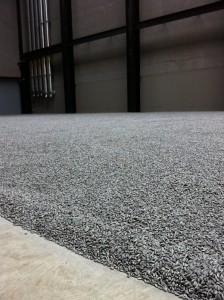 Only there’s nobody raking, and these aren’t really sunflower seeds. Just a hundred million porcelain bits, all made by hand, painstakingly hand painted, one by one, by people from a small town a thousand kilometers away from Beijing. All looking alike, lost in the mass, yet all different. 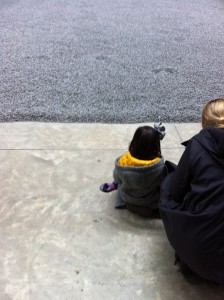 Mother and child by the field Sunflower Seeds

Ai Weiwei and the Tate modern have done a beautiful job with this exhibition. The space layout could have been more comfortable and leaving room to breathe and think, but it does make sure that you won’t miss the video documentary about the making of the sunflower seeds, from the mine shaft to the gigantic hall of the Tate: how the piece gave work to 1,600 people over the course of 5 years, in a region famous for its porcelain but which hasn’t had a lot of business lately.

Neither vases nor the painted face of Chairman Mao sells much these days, it seems…

And there lies the masterful beauty of “Sunflower Seeds”, (and the success of the ever-political Ai Weiwei) in how effortlessly it shakes and shatters our prejudiced perception of “made in China”. After seeing the young woman beam with happiness because the project gave her work for a while; after seeing the old woman painting the seeds with her family in their house, as she had bee painting porcelain for the past 30 years; after all that, we can’t but give a face to the oh-so-Daoist love of making things with one’s hands, even through really repetitive tasks. And we can no longer limit our idea of “made in China” to the dreadful images of the FoxConn factories, or just the faceless stream of cheap shit plastic stuff on our supermarket shelves.

The exhibition is meant to be “interactive”, with video booths set up for visitors to leave messages to the artist(s). I skipped. But I wrote this.

The Sunflower Seeds exhibition runs at the Tate Modern in London until May 2nd, 2011. Free entrance. 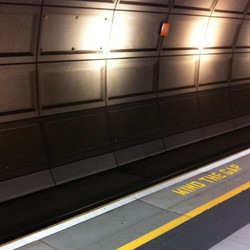 It's hard to fall in love when the heart's already taken. I was decided to give London a fair chance. Surely, the costly and exhausting move in the middle of winter, when my typical working day would hardly let me see the light of day and only let me see the new city through a veil of night and rain, surely all this would be handicap enough without me making it even harder.

First visit at the British Museum: an example of both the best and the worst of exhibition design.